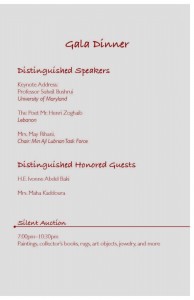 The mystery of Lebanon lies in its uniqueness.

It is what you perceive in the clouds of Lebanon: thin, transparent, and filled with that which genius yields.

Lebanon: small geographic space yet a universal space of mind and spirit.

It is the uniqueness associated with a lighthouse: limited in the space it occupies, yet limitless in its reach and influence.

Lebanon sent its sons and daughters across the seas, ingenious men and women, creative and entrepreneurial.

They built monuments in honor of all who aspire and achieve in every land and in all civilizations.

They settled everywhere, the world was their country and they were its citizens.

They distinguished themselves in every field of knowledge, enriched by and enriching the lands they had adopted.

As old as the cedar trees, its snows and historic mountains, as old as its sea and sun, Lebanon has been, still is, and will always remain the bright light that dispels the darkness of the Middle East.

Lebanon is the land of creativity and dynamism not fanaticism and fundamentalism.

Lebanon is an oasis of dialogue between cultures and civilizations.

The richness of its nature, the diversity of its people, create variety and wholeness not fracture and faction.

Lebanon is neither geography nor demography, but a nation with a mission, a mission that emanates from both its history and heritage.

Lebanon the land of EL, the Father of all Gods, the first god of love and forgiveness,

Lebanon the land of Byblos (the oldest inhabited city that initiated the alphabet with Cadmos, and gave its name to the Bible; Lebanon the mother of the word and the book).

Lebanon the land of Tyre, the city whose beautiful daughter gave Europe its name.

Lebanon the land of Sidon, the city of Eshmoun, the god of healing and of health.

Lebanon the land of Baalbeck, the city of everlasting-mystery, of ancient architecture.

Baalbeck of Lebanon remains to this day the most beautiful temple of the East and the West.

Lebanon the land of Beirut that housed the most ancient of the schools of Law some hundred centuries ago.

Lebanon the land of Cana, where Jesus performed His first miracle and turned water into wine and where He declared unto His disciples that He was the Messiah.

Lebanon of ancient civilizations, myriad cultures, diverse legacies which meet to celebrate its mission and future.

Unity and peace has always been Lebanon’s mission: this is Lebanon’s identity: It is a mission of dialogue and reconciliation.

In Lebanon dialogue was born to avoid conflict. In conflict war thrives with dialogue, peace triumphs.

Lebanon has always been a refuge where the oppressed found peace and justice, where the different cultural, ethnic and religious communities came to accept one another, if not politically at least spiritually and socially, away from the divisiveness of politics.

Because Lebanon is the land of freedom, it has become a battlefield, the weakness of successive governments turned that freedom into slavery to power and wealth, its independence and wealth utterly compromised.

Lebanon can no more be a platform for others to execute their conflicts on its territory.

Lebanon must be designated an official role by the United Nations.

It must become a moderator and an ideal platform for dialogue.

Once this is achieved, Lebanon will be protected against the enmities and conflicts of the region that surrounds it, it will become strong in defense of human dignity and of world unity.

I believe that “Min Ajl Lubnan” has been created to realize that Lebanon of the soul, the spirit and the mind purged of prejudice, divisiveness, hatred and anger. This inaugural gathering today signifies the commitment to a noble mission inspired by the words of Ameen Rihani who said: “I am my country’s chosen voice” and of Kahlil Gibran who said: “Only death can dim the lamp of knowledge that is within you”.

Let this newly born Min Ajl Lubnan be our “chosen voice” for a new Lebanon and the new “lamp of knowledge” as a torch to be passed to a new generation of the young men and women of Lebanon.

Congratulations to you all on the birth of this new initiative on behalf of Lebanon, Men Ajl Lubnan.

Congratulations to Lebanon for having you all the true lovers of your great land and what it stands for.

Let us hope that tonight we are witnesses to the birth of a great idea: the Lebanon of the future; a Lebanon founded on justice, unity, and peace.

Copyright © 2013-2022 Henri Zoghaib. All Rights Reserved.
Powered by: Kleudge | Based on a WordPress Modified CatchBox Theme